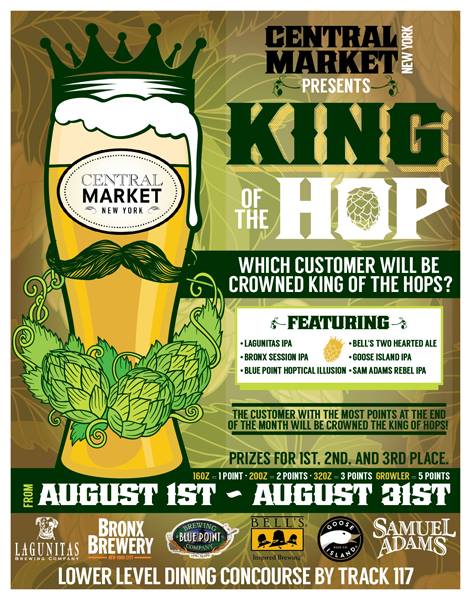 As a graphic designer and brewer, I notice ads and commercial spots related to beer, especially craft beer. The marketing for these ads, which range from festivals and new beers to grand openings of breweries, typically have a clear understanding of the audience in the beer community. When I first came across the “King of the Hop” contest ad in Grand Central, I immediately noticed that the competition as a whole was lacking a true representation of the beer community.

“King of the Hop” is a friendly competition for beer enthusiasts to support craft breweries and accumulate points by purchasing IPAs from Central Market all through August. Each participant is given a punch card to earn points from participating breweries: Lagunitas Brewing Company, The Bronx Brewery, Blue Point Brewery, Bell’s Inspired Brewing, Goose Island Beer Co., and Samuel Adams. At the end of the month, the three customers with the most points will win prizes from the breweries.

So what’s wrong with this contest? Deeming the winner “King” with the little mustache on the beer glass entices only males to enter.

It’s surprising to me that messaging for this competition is marketed towards men; especially since consumption rates among females age 21-34 are over the national average, according to stats provided by Dr. Bart Watson, Chief Economist for the Brewers Association (2014). In addition, women account for 25% of total beer consumption by volume, and 37% of craft-beer consumption in the United States. So while men may still hold the highest group among beer consumption in the U.S., the gap between the sexes is not far off.

Where is the New York love?

While all six participating breweries have been recognized with awards for their quality of beer, only two are from New York. Since Grand Central is one of the most iconic landmarks in Manhattan, with 750,000 people visiting daily for travel, dining and shopping, I would have liked to have seen a true New York craft beer contest to raise support for the breweries all over New York, including Long Island, Staten Island, and Upstate New York.

And about the Celiacs

I love the idea of an IPA contest and, since I work close to Grand Central, I could enter the contest for the “Queen of the Hop.” But since I suffer from a gluten allergy, I’m automatically excluded from participating.

In the last couple of years, the market for gluten free and gluten removed beers has multiplied. Breweries across the country have experimented and successfully produced great tasting beers. So I was confused when I didn’t see Omission’s IPA or Stone’s Delicious IPA included as participants, especially given the fact that ‘gluten free’ is the fifth most searched phrase on Google, according to Mintel Market Research (2013).

I do appreciate Grand Central’s events throughout the year because I like the idea of their mission, which is to truly bring New Yorkers and tourists together. I’m not saying they’re doing it wrong, but they could definitely do it better.