Gluten-Allergy? What to Drink at Beer Fests

Home » cider » Gluten-Allergy? What to Drink at Beer Fests

As someone with a gluten-allergy, many people ask me what I drink at beer festivals. Although I am no able to taste everything, there are a great number of beers and ciders I can try if I know what to look for. Not all festivals have many options, but Blue Point Cask Ale Festival is one the best ones for Celiacs to attend. This year’s festival took place on Saturday, 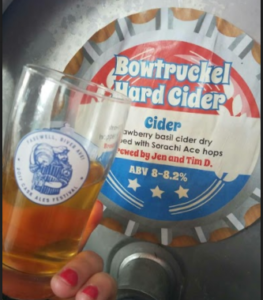 April 22 at Blue Point Brewery and it was expected to be the last festival at the brewery before their big move to their new location.

Festivals can generally be overwhelming for people who have allergies to shell fish, nuts, and dairy, but with warning labels. But unfortunately, you won’t see labels for beers that are gluten-free or gluten-removed. I suggest doing your research beforehand, which is what I did before going to this festival. Here are some tips for celiacs to prep before festivals:

Look for Homebrew Clubs
Homebrew clubs are known for bringing their ‘A’ game to festivals. They’re not afraid to experiment with recipes and that includes gluten-free and gluten-removed beers, meads, and ciders. For this festival, Handgrenades Homebrew and Craft Beer Club had a gluten-removed beer brewed by Jason Scott. He brewed “Bart’s Beer,” a white sweet stout with butterfingers.

Long Island Beer & Malt Enthusiasts has a brewer who has Celiac and usually has a gluten-free beer or cider at their booth. I tasted Bowtruckel Cider, 8.2%, strawberry basil cider dry hopped with sorachi ace hops, brewed by Tim and Jen Davis. It had the perfect balance of herbs, sweetness, and a kick of spice.

It doesn’t hurt to ask your local breweries if they have gluten-free or gluten-removed beers or would consider brewing them. Some breweries, such as 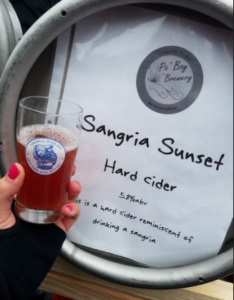 Moustache Brewery in Riverhead, brew beers that are gluten-removed, but aren’t necessarily labeled. I have had their beers in the past and had no allergic reaction, and now that they can their beer, I’m stoked to pick them up at any beer & soda store. However, celiacs have their own level of sensitivity so I suggest you ask about the enzymes that are used and testing that has been done to the beer before consuming it.

Po’ Boy, a Port Jefferson Station brewery that opened up this year, publicizes beer and naturally gluten-free cider in the tasting room.  At Blue Point’s festival, Bobby Rodriquez, brewer and owner of Po’ Boy, had a cask of Sangria Sunset, 5.8%. His cider tasted as sweet as a sangria without the heavy feeling of wine. I was impressed by his creativity and how closely it tasted to actual sangria.

Ciders and mead are great choices for celiacs to drink, but also check out Spiked Seltzer. Spiked Seltzer has always been on my list of favorites, especially during the summer. It’s a great gluten-free alternative to beer and cider. Spiked Seltzer distributes four varieties: Orange, Cranberry, Lime and Grapefruit at 6%, but for the festival I tried two cask cocktails: Orange Mimosa and Lemon Bitter, both gluten-free at 8%. While they were both delicious, I prefer their originals.