I have been dreaming about visiting Chicago since I was a kid. My inspiration was drawn from watching shows like Early Edition and Family Matters, and movies like Adventures of Babysitting and Ferris Bueller’s Day Off.

Although CiderCon took a huge chunk of my time (you can read all about it here), I managed to hit some memorable spots while I was in the city. Once again I traveled with my friend Kristyn and a new traveling buddy, Kristen. The three of us explored the city according to Kristyn because to be honest, she knows how to make the best out of any trip even with little time. 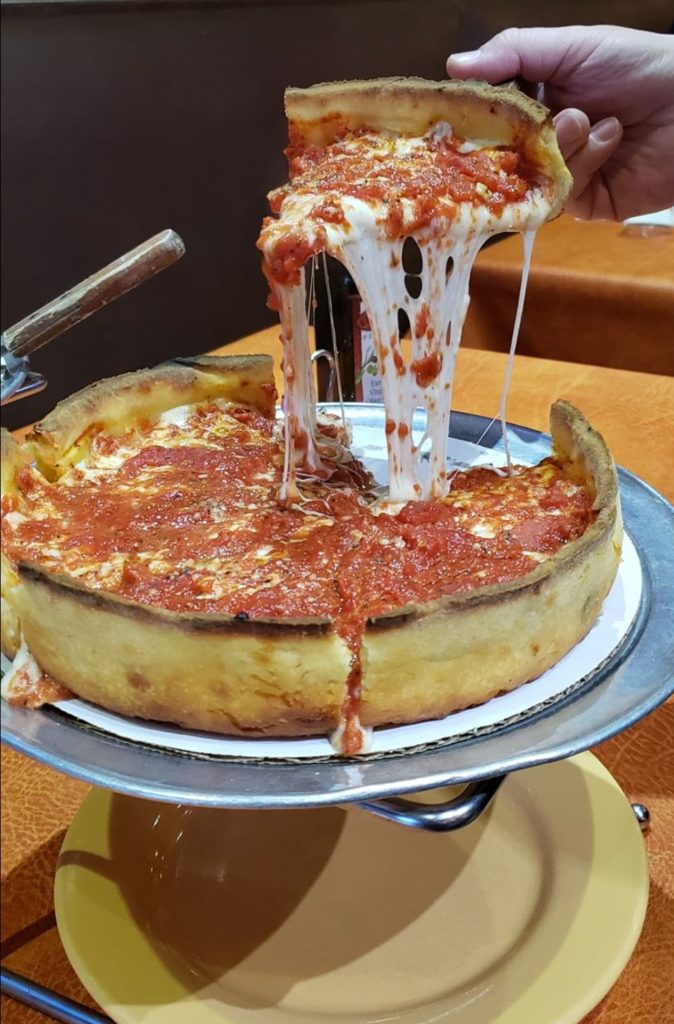 When I landed in Chicago, I ventured off with my new cider friend Corrie to find deep-dish pizza. It would have been a heck of a lot easier to walk down a few blocks from my hotel to grab a slice, but we had to specifically find a pizzeria that served gluten-free deep-dish. I did not know if such thing existed, but with a little help from Yelp, I found Chicago’s Pizza.  I didn’t have high expectations being from New York, but Chicago’s Pizza did not disappoint. I waited a little over 30 minutes for my personal pie and kept it simple with just marinara sauce, cheese, and basil.  The pizza itself is sloppy, fork and knife is necessary. One piece is also more than enough to fill you up. Also on the menu, is stuffed deep-dish pizza. If I had enough time, I would have gone back to try that out too. All in all, it’s no New York pizza, but it can pass as a good slice.

We also sat in on an informative cider event: “Hops in Cider: Hop Rub with Nunzino Pizza” of Hop Head Farms. Pizza walked the group through the life cycle of the hops, what to look for when selecting hops for your ciders, and which hops work well with styles and adjuncts.

3 Skulls, Make that a Double
Three Dots and a Dash

I was recommended to have cocktails at Three Dots and a Dash by a number of people, including locals. This cocktail bar is a mash between a speakeasy and a tiki bar. It is located down a sketchy alley, lined with palm trees and tiki lamps up to the entrance of the bar. Walk down a few steps, pass the skulls, and you’ll arrive to a tropical island. I quickly forgot that I was in Chicago’s Arctic weather

The food menu is small, but the drink menu is extensive featuring a mix of original recipes and their spin on classic drinks served in festive mugs. Most drinks listed on the menu have skull symbols next to the name to indicate how strong the cocktail is. The more skulls labeled, the stronger the drink.  I went with Camp Anawanna, served in a skull mug and made with overproof Jamaican rum blend, lime, pineapple, toasted marshmallow, maple, and cinnamon. This cocktail is labeled with three skulls, in case you’re wondering.

I consider myself an adventurous person, or at least I used to. Despite being afraid of heights, I’ve gone parasailing, bungee jumping, free falling, and zip lining.  I was told that doing these things would help me overcome my fear, but nothing has changed yet.

To further my self-therapy, Kristyn suggested we visit 360 Chicago at the John Hancock building.

The view at night was absolutely breathtaking, so I highly recommend this tourist attraction. But what came next was definitely thrilling.  Kristyn, Kristen, and I courageously went on the Tilt, a ride that tilts you outward from the Hancock building 1,000 feet in the air. Kristyn, who is a daredevil, had no doubt she’d love it. As for Kristen and me, we were in utter shock. Actually, Kristen froze and I screamed and jumped back onto safer ground. Was I terrified? Yes. But was it worth it? Absolutely.

You can’t visit Chicago without visiting The Bean, officially known as Cloud Gate. Located in Millennium Park, Cloud Gate is a stainless steel public structure built in 2006 by Sir Anish Kapoor. The dimensions are 33 ft × 42 ft × 66 ft. Although it clearly looks like a bean, Kapoor said he was inspired by liquid mercury and the sculpture’s surface reflects and distorts Chicago’s skyline. The reflection varies as you walk around Cloud Gate and really shows you how beautiful the Chicago can be, even in 6-degree weather. 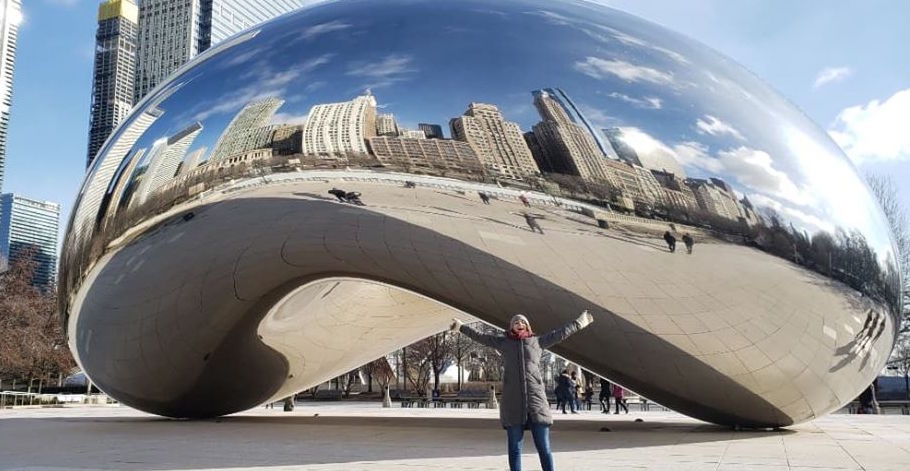 It was our last night in Chicago, so Kristyn and I thought we’d go out with a bang and dine at another highly rated restaurant in Chicago. From the outside, The Northman Cider Pub and Bistro looks like a dive bar. Step inside, and you’re surely mistaken. The cider bar features over 125 ciders from around the world, including Spanish cider served in traditional porron. It was then when I realized I really haven’t had as much cider as I thought.

I created my own cider flight and paired it with two unique dishes: Chickpea Panisse (with butternut squash, feta, pumpkin seed vinaigrette, candied pepitas, fennel, scallion) and Risotto (with broccoli, poached egg, brown butter poached pine nut, taleggio fondue, tarragon).  Finishing up my trip at The Northman was a nice way to end my week in Chicago.