Last weekend sadly marked the end of beer and cider festival season for me with the 2016 Great Beer Expo at Belmont Racetrack. My 8.5% maple pecan cider, #IPecantEven, was one of hundreds of beers, ciders, and wines at the festival.

While I could take a week off and relax like a normal human being, I already started brewing my third batch of Brettastic Boombastic Pina Colada Cider and my second batch of #IPecantEven. Both should be ready by the holidays! I haven’t decided to take a break just yet. I mapped out an Upstate Beer & Cider Trail that seems doable for those looking to get away for a few days. Wish me luck as I begin my adventure this weekend. Catch me on Snapchat & Periscope for live feeds and interviews with the brewers / cidermakers. 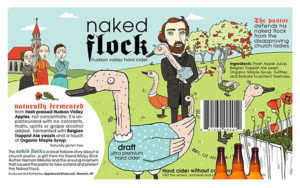 Glenmere Brewing Company located in Florida, NY is a locally owned craft brewery operating with over 15 years of combined brewing experience. Glenmere Brewing brews on 15 barrel system, produces up to 3 beers at a time, and currently has four beers on tap available this season.

As Pennings Farm Cider celebrates their second anniversary, I thought it would be fitting to add them to my beer/cider trail! Pennings cidery offers seven ciders on tap ranging from dry, semi sweet, hopped and other flavored ciders. All ciders are made on the farm their own apples, hops and other fruits. Interestingly noted on their website, the cidery also carries variety of other New York State cider, craft beer and wine. Great support for local businesses!