Last week, I went on the most packed-out trip in the shortest period of time! I spent 24 hours in Austin, Texas with my friend Kristyn. With her planning and our combined enthusiasm, we were able to hit almost all of the spots on our list. If you have a layover or have the opportunity to fly to Austin even for only 24 hours, follow some of spots from our trail and you can have amazing memories too!

Berdoll Pecans is a few short miles away from the airport, and it’s a great spot to pick up pecan candy, brittle, and of course pecan pie! Berdoll makes 1,170 pecan pies annually. This shop is great for snacks to munch on or souvenirs to bring back home. They have free samples of practically everything, including sweet jalapeno pecan brittle! Be sure to say hello to Ms. Pearl, the tallest squirrel statue in the world, standing at 14 feet tall. If you’re on a time crunch, check out their vending machine outside. How convenient!

Eat breakfast like a Texan by starting the day with breakfast tacos! Although most spots have food trailers lined up with a variety of styles of food, you’ll always see tex-mex. The tex-mex menu isn’t limited to steak or chicken. Instead, these trailers feature hearty, tender meat ranging from brisket, pulled pork, chorizo and loaded with potatoes, eggs, and cheese. You can find a breakfast trailer like this at Cosmic Coffee & Beer Garden.

Cosmic Coffee & Beer Garden features over a dozen craft beer, cocktails, coffee, and boozy coffee! I recommend the cold brew, made with locally roasted beans. This quaint shop is nestled on a small farm with chickens and a rainwater pond, which is naturally filtered and self-sustaining. It’s the home to a wide variety of flora and fauna including many edible plants, frogs, toads, dragonflies, fish, lizards, and turtles. There are many species of birds on the property too, each singing lovely sounds.

As a New Yorker, I have always been amazed with beautiful graffiti murals including 5 Pointz: The Institute of Higher Burnin’, once located in Long Island City. I did not realize how eclectic Austin was prior to this trip. HOPE Outdoor Gallery is a 6-acre graffiti park in an abandoned condo development in Austin. The park is very detailed, colorful and ever changing. In 2011, the space was first filled with Obama’s Hope posters. Unfortunately Austin’s Historic Landmark Commission recently approved the demolition of the park and will most likely be turned into a condo development once again.

Before checking out some cider in Austin, Kristyn and I made a nature stop located near HOPE Outdoor Gallery. Pease Park Conservancy features “Stickwork,” a five-piece maze sculpted by Patrick Dougherty. According to the Pease Park Conservancy, Dougherty is a North Carolina-based artist known for creating whirling architectural sculptures from locally harvested saplings. It took Dougherty and a team of over 200 volunteers to install this piece.  Dougherty says of his inspiration for the sculpture, “We didn’t build a cathedral, instead we borrowed its corners,” referring to the Spanish-Colonial style architecture he encountered during his time in Austin. The piece is here to stay for a few years. Once dismantled, it will be used as mulch at the park.

I had the pleasure meeting Lindsey Peebles and Nick Doughty of Texas Keeper Cider, located in Manchaca (30 minutes outside of Austin). All of their artisanal ciders consist of a blend of 9-10 heirloom apple varieties and are 100% fresh pressed from New York State apples. Their ciders are delicate with sweet aroma and crisp, yet complex flavors. The tasting room is open everyday except Monday and Tuesday. Some of the ciders they have available on tap and bottles are: Honey Thief Cyser, Cider Weizen, (uses Hefeweizen yeast) Heirloom, Auguste Cerise (Double-fermented with 2 heirloom varieties of sour cherry). 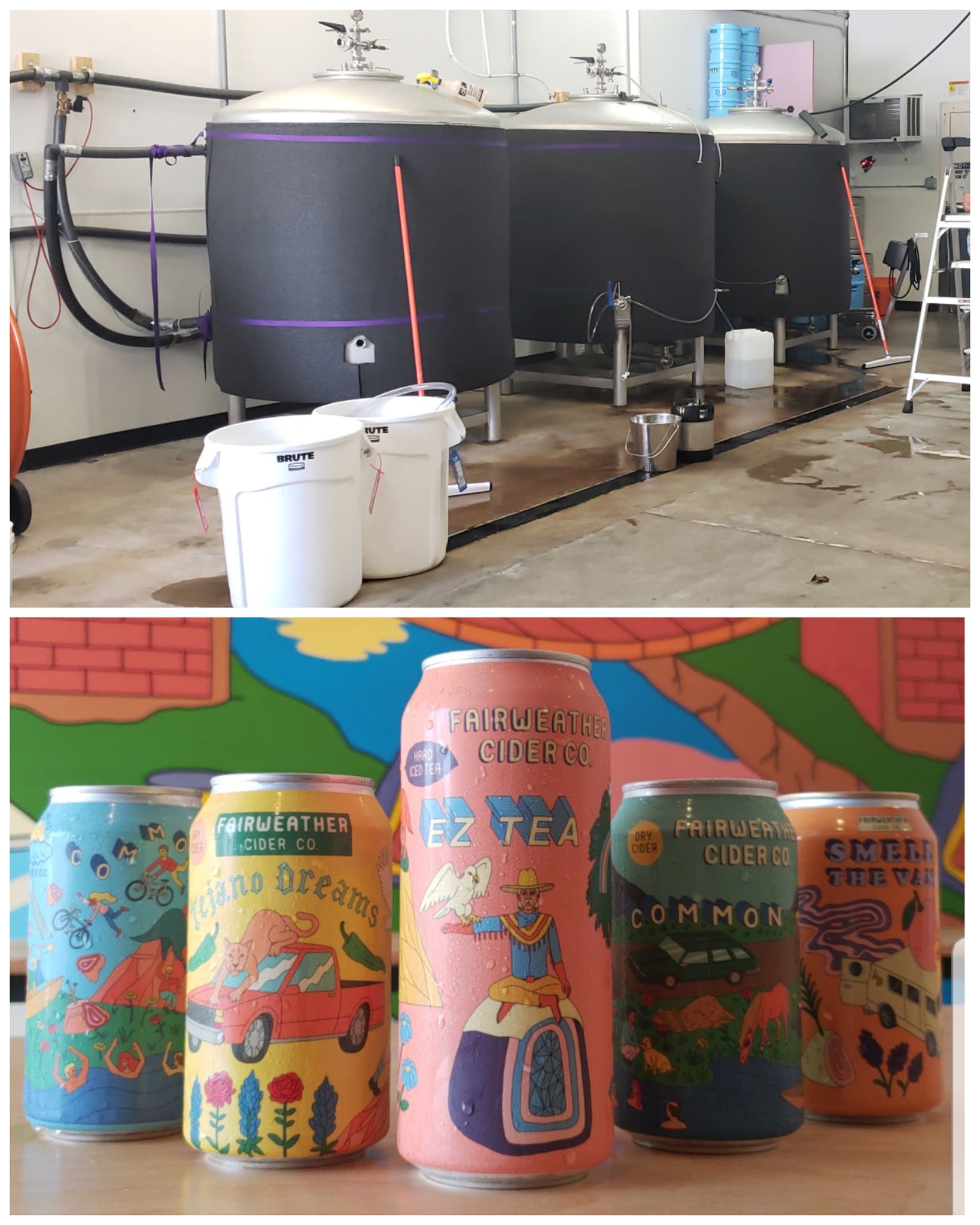 John Staples and Michael Gostomski White are the proud owners of Fairweather Cider Co. Fairweather, which will celebrate its first anniversary on November 24, produced more than 7,000 gallons this year. The cidery uses apples from Portland, Oregon to make modern, dry ciders. The tasting room is open Friday – Sunday and features 12 eclectic ciders on tap, mostly with hops. Fairweather also has five styles available in cans including Tejano Dreams (fermented with Anaheim Peppers), Common (farmhouse style), and Smell the Van (fermented with gin botanicals).

After visiting the tasting rooms, Kristyn and I decided to stop at Mayfield Park and Preserve. This historic site contains a cottage, several gardens with vibrant flowers, ponds, and beautiful peacocks. Outside the peacock park is 21 acres of trails. I’ve never been so close to peacocks before. It was definitely a relaxing break for the day.

Our last outdoor adventure was quick, but interesting. Sparky Pocket Park is a quirky public park featuring a grotto stone wall. The park was once an electrical substation and is now home to pockets full of tchotchkes, notes, photos and more. I found little figurines, a note of the top places to visit in Austin, and seashells. Although it’s a peaceful, small, park, you can spend hours admiring every detail of this wall.

How can I possibly describe 6th Street in Austin? Cheap beer, trendy junk art, old Vegas, and wild energy. It reminded me of college nightlife in many ways. We visited 6th Street prior to having dinner, so it wasn’t as wild as it would be had we gone at night. Places to visit on this strip include Jackalope (dive bar) and Curiosity Shoppe (odd items on display).

Austin has the largest urban bat colony in the world! You can view the 1.5 million Mexican-free tail bats each night from March to early November 20 minutes before sundown under the Congress Avenue Bridge. These bats fly 60 miles per hour and heights of 10,000 feet. Arrive early to avoid the crowd and watch out for runners and cyclists in your path.

Even though we had a heavy breakfast, Kristyn and I still wanted to experience an authentic Texan meal. We heard that many places that have barbecue often run out of meat by lunchtime. Luckily there was still meat available at Terry Black’s Barbecue. This restaurant is a cafeteria setting, where you serve yourself with sides first (corn, potato salad, cole slaw, rice, etc.) and walk up to the counter to weigh meat by the pound. They offer two types of sausage (spicy and non-spicy), turkey, brisket, chicken, beef ribs, pork ribs. For my tray, I ordered brisket, jalapeno cheddar sausage, and pork ribs. Three styles of sauce are available, although I can promise you that you won’t need any because the meat is so juicy and flavorful. Terry Black’s also has dessert (pecan pie, peach cobbler, and banana pudding), which unfortunately I couldn’t partake in.

Instead of hitting 6th Street and its craziness, we took the mature nightlife route and headed to Rainey Street. Rainey Street is a strip of old Texan homes that converted to bars and restaurants. Each bar had a unique flare. The first bar we visited was Half Step, a cozy bar with an outdoor patio, located on 75 1/2 Rainey Street. The bar featured jazz music and craft cocktails, which they rotate often.

For our second bar, we went across the street to UnBARlievable. This bar is brightly lit with a zoo-like fence, turfgrass, colorful patio chairs, and a giant giraffe with a clown nose to greet you as you enter. Inside, the décor makes you feel like you’re at the circus. There are carnival games everywhere, chalkboards and magnets at every table to leave messages, and a giant slide at the back of the bar. Although UnBARlievable did not have a large cocktail menu, they had mostly local beer from Austin on tap.

Prior to visiting Austin, I thought Texas would be filled with BBQ, cowboys, and boots everywhere. I had a taste of the BBQ, I’ve seen the boots, but I hadn’t seen the cowboys…until The White Horse. This bar was just what I imagined for this trip. Don’t expect chic decor or craft cocktails, but instead a dive bar with old school country songs and lots of dancing. No cover for any of the bands. Just bring your cowboy boots and an open mind.

Have a little more time? Check out some of the spots we wanted to see, but weren’t able to make it: Cathedral of Junk, Hamilton Pool Preserve, Barton Springs, Argus Cidery, Jester King Brewery.